A brief quote from a brilliant piece by Stanley Hauerwas a few years ago here:

“Jesus was crucified because he embodied a politics that threatened all worldly regimes based on the fear of death. And so Easter has profound political consequences…

…He gave them a new way to deal with offenders – by forgiving them.

He gave them a new way to deal with violence – by suffering.

He gave them a new way to deal with money – by sharing it.

He gave them a new way to deal with problems of leadership – by drawing on the gift of every member, even the most humble.

He gave them a new way to deal with a corrupt society – by building a new order, not making the old.

He gave them a new pattern of relationships between man and woman, between parent and child, between master and slave, in which was made concrete a radical new vision of what it means to be a human person.

He gave them a new attitude toward the state and toward the “enemy nation.”

Stanley Hauerwas is among the several great speakers at the 2018 BMS Catalyst Live day events in Bristol and Birmingham:

David Bebbington – Professor of History at Stirling University and Visiting Professor at Baylor University; creator of the ‘Bebbington quadrilateral’, his definition of evangelicalism

Baroness Elizabeth Berridge – Member of the House of Lords, with a wide range of interests including international freedom of religion and belief

Ron Choong – Theologian of science and biblical archaeologist; Founder and Executive Director of the Academy for Christian Thought in New York

Paula Gooder – Director for Mission Learning and Development in the Diocese of Birmingham; previously Theologian in Residence at the Bible Society

Rosie Harper – Vicar, Chair of the Oxford Nandyal Education Foundation, writer and activist on issues of justice and equality within and beyond the church.

Harry & Chris – Harry Baker is a world poetry slam champion, and his childhood friend Chris Read is a jazz musician; together, they are the wonderful Harry & Chris

Amy Orr-Ewing – Director of Programmes for the Oxford Centre for Christian Apologetics; Amy will be speaking on her doctoral research on the work of Dorothy L Sayers

Adrian Snell –  Musician; Adrian’s music is renowned worldwide, with albums including ‘Alpha and Omega’ and ‘Song of an Exile’. Adrian will be speaking on his amazing work as a music therapist, as well as playing live

Anne Wafula Strike MBE – Anne was the first wheelchair racer to represent Kenya, where she was born; she has since become a Paralympian with Team GB, has been recognised in the Queen’s Birthday honours and is an author and sporting ambassador

And finally, Catalyst Live 2018 is hosted by Mark Woods – consulting editor of the Methodist recorder, author, commentator and very good friend of BMS! 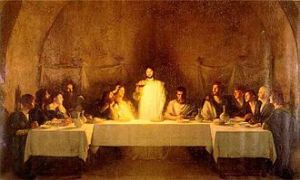 “We are made, through Christ’s body and blood, God’s sanctuary, God’s holy temple, for the world.  Just as bread and wine is transformed by the Holy Spirit to be for us the body and blood  of Christ, our lives, our everyday sacrifices, are taken up into his oblation.  Through that transformation the sacrifices, so often forced upon us, can become life giving because they have an end.

So [next time you eat the bread and drink the wine] remember the painful sacrifice of the Son, a sacrifice in which we are made participants, and rejoice and be glad.”