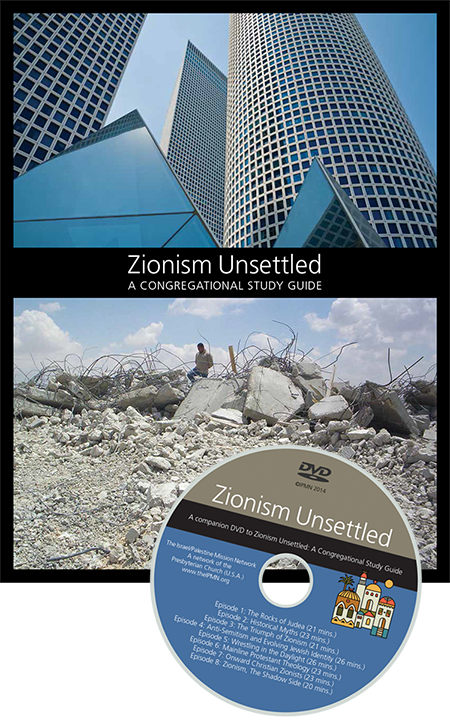 Zionism Unsettled produced by Israel/Palestine Mission Network of the Presbyterian Church (USA) (website here), released one year ago in January 2014, is a great resource for Churches working towards a more healthy and hopeful  understanding of the terrible situation between Israelis and Palestinians.  PDF flyer here.

One blogger, a Rabbi no less, Brant Rosen, calls this production an “exciting guide…..smart, gutsy and important.”

James M. Wall, over at Wallwritings defends the publication in the face of an inevitable outcry of antisemitism, poor history, a guide that is “neither false nor misguided.”

The video production links are given below, and in the space given to each video, approximately twenty minutes each, they really are a succint and helpful introduction, something I would commend to followers of Jesus in the Churches everywhere.

In many ways, the criticism, whilst treading a very tired and frankly, predictable path, is a cheap shot given the people who have commended the work.  Of note is the great Old Testament Scholar Walter Breuggemann, Professor Emeritus, Columbia Theological Seminary,

“The urgency of the Palestinian plight in the face of Israeli intransigence indicates that intentional, concrete, and sustained public action is necessary to respond credibly to the crisis. Zionism Unsettled…will prove an effective vehicle for helping to mobilize public opinion so that both attitudes and policies can be transformed in the face of an imperious and exploitative ideology.”

Similarly, Ilan Pappe, Israeli Professor of History at Exeter University, England, is a contributor on one of the productions.  Pappe has contributed to a critique of the Zionist ideology through many articles and books over many years, and has paid a high price for his convictions.

And conviction is the reason I am posting this.  In a paper unconnected to Zionism Unsettled, in a critique of Christian Zionism in

Speaking the Truth – Zionism, Israel and Occupation (ed. Michael Prior), Peter J. Miano, Executive Director of the Society for Biblical Studies, writes in his chapter ‘Mainstream Christian Zionism’ that in

“Reconsidering Christian Zionism in its mainstream form leads inevitably to vexing moral conflicts.  It requires re-examination of widely held assumptions about ethnic identity and nationhood and the moral implications of these.”

“It raises issues that are considered taboo in the Church and takes us into perilous academic ‘no-fly zones’.  But intellectual honesty requires no less” (emphasis mine) p.145.

I myself have firsthand experience of this taboo in the Church, from people I do not know and people I do.  It is always a heart-sinking moment when the letter you’ve just opened is not so much a robust converstaion but a ‘no-fly zone’ hidden behind language masquerading as informed whilst reinforcing the unspoken taboo – “Don’t criticise Israel – anything but that!”

Well, I love Jewish people, secular or religious.  I love the ancient biblical land of Israel/Palestine.  I love Palestinians, Muslim or Christian.  I do not love or like Zionism, an experimental ideology that has been weighed and found wanting, and in the process, ruined generations of lives.  It is not just intellectual honesty that requires this terrible system of oppression and de-humanising be confronted, but it is moral courage in the face of occupation and conquest that must also drive forward this conflict to peaceful conclusions.

Click here to go to the Vimeo video production links…