Gralefrit is (another) blog of theological musings and sermons and other juicy tit-bits from a follower of Jesus Christ, hoping to be joined by others along the Way.

Gralefrit is a made-up word coined by the undercover policeman (played by Robin Ellis) in an episode of Fawlty Towers (A Touch of Class) who, when ordering breakfast from the maid Polly, assumed the persona of an ignorant illiterate, and ordered his grapefruit by stumbling through the menu asking for a “gralefrit’.  Classic!!

The link with this web site should be obvious: My name is Richard Matcham, I am a God-lover, Jesus follower, (UK) Baptist Minister, aspiring-theologian, husband, father of four, grandfather to a beautiful granddaughter; but feel that any attempts to explain the divine grapefruit of God, His Word and world, only end up as a stuttering and incoherent stumble towards something that stretches and leans towards the real thing.

I have an MA in the subject I love – theology, but really, all that reveals is how little I do actually know, and how much I have still to learn and grow in about God – the world, people and pretty much everything!  I read books because I’m stupid!  It is as the Preface to Soren Kierkegaard’s Fear and Trembling plainly states, “…it seemed to me that the effort to instruct myself had no effect other than the increasing discovery of my own ignorance.”  Guilty M’lud!

If I can tempt you with my gralefrits, then maybe you can be encouraged to actually taste the real thing.

I live in the Somerset town of Taunton, England – after living in the land of Faulty Towers – Torquay – for nine years!!  I love my wife (Rachael), my children (Andrew 26 Abigail 25, Samuel 21 and Laura 3); and the Queen of the Sciences – Theology (most often in that order – though somehow, my addiction to coffee occasionally creeps in).  And to prove I’m sane, I support Liverpool Football Club, am fond of good beer and wine, and I love walking in the pouring rain. 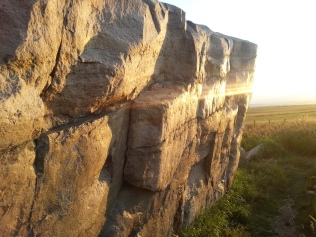 The picture on the Canadian Okotoks ‘The Big Rock’ with my arm in the air (on the front page) was taken with my eldest son Andrew when we were in Canada for my daughter’s wedding in 2015.

About the headline Gralefrit picture: I took this on Saunton Sands beach, north Devon.  My wife Rachael is the distant figure, and to get the right shot, all other walkers could hear for a few minutes was me bellowing “BACK A BIT, LEFT A BIT”, until the light and shade was right.  I love it!

And so, in the wonderful words of John Calvin, “Farewell, kind reader: if you derive any benefit from my labours, aid me with your prayers to our heavenly Father.”

5 thoughts on “What is a gralefrit?”