Today, we will go to Beirut and the West Bank.

One of my most important objects is a large iron key.

I bought it from a Palestinian Christian shop-owner in Old Jerusalem.

The Key is a very potent symbol for the Palestinians, Muslim and Christian.

It symbolises the right to return to their homes, lost since the refugee crisis of 1948 when 750,000 Palestinians were removed from their land and homes. 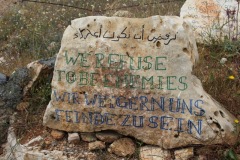 Among the many consequences of this decades old situation, are two Palestinian Refugee Camps that I have been to.

One was in Beirut and the other in the West Bank.

The Shatila Refugee Camp in Beirut was established in 1949.

It is an exceptionally densely populated area of 1 sq. KM, from about 10000 before the Syrian civil war to about 20000 today.

The lack of ground space means that buildings rise up from the narrow streets, creating a terrible lack of sunlight.

Hopelessness was tangible, and threat an ever present reality.

The 2nd was the Aida Camp in the West Bank itself.

This camp is located just 2km north of Bethlehem, and was established in the 1950’s by refugees from Jerusalem and Hebron.

Here, there are but 2 schools; no health clinics; a disrupted water supply; poor sewage and unemployment approaching 50%.

This is an on-going storm-centre for world politics.

One Palestinian protest states:  “No injustice will last forever.”

This Pause for Thought  is not about apportioning blame.

Enough of that has been done, and often very cheaply.

No one should be a refugee, not least whilst still on their own ancestral land.

The Judeo-Christian tradition rejects the claims by some that we live in a random, accidental universe;

Where human dignity and justice should not matter if we are merely stardust bumping into each other in a meaningless and ultimately futile existence.

But human dignity and justice do matter.

The fact that they matter is a sobering reality.

Because human beings are made in the image of the God who made us;

A God who has self-declared to be a God of Justice.

Justice for the religious and secular Jew/Israeli

Justice for the Palestinian Arab: Muslim or Christian.

We are talking about justice for human beings!

The indomitable personality that is Desmond Tutu, a man who committed his life to justice and human rights amid the South African Aparteid years, said,

“We need to put out a clarion call to … Israelis and Palestinians, saying, ‘Peace is possible.  Peace based on justice is possible. We will do all we can to assist you to achieve that peace, because it is God’s dream, and you will be able to live amicably together as sisters and brothers.”

He adds, “Yet, injustice and oppression will never prevail.  Those who are powerful have to remember the litmus test that God gives to the powerful:  ‘How do you treat the poor, the hungry, and the voiceless?’

Justice must be in place for real peace to exist.

As the Palestinian Pastor and theologian Alex Awad once wrote to me in 2013, “Richard, Love God, seek justice, and pray for peace.”