Second of nine children of Elizabeth and Charles, was born at East Street, Newton Abbot on November 22, 1854.

His father, who was manager of the Torquay Brewery in Warren Place and the Malt House in Temperance(!) Street, Torquay, eventually moved the family to Torquay in 1864, after which Frank attended school at Babbacombe before leaving to become an office boy with a local architect.

It was Mrs Mary Bridgman, who owned many public houses in Torquay including the Maritime, the Steampacket, the Railway Inn and the Malt house, that first employed Charles Matcham.

Mary’s son, George Soudon Bridgman, ran a local architect’s and surveyor’s office in the town so perhaps it was not surprising that 14-year old Frank should find himself working at the Bridgman office.

Certainly this was where his interest in architecture was born.  The young Bridgman, at only 23, was already leaving his mark on Paignton, having become involved with designs for the water supply, a school, many public buildings, and even the rebuilding of Teignmouth Pier.

But it was not long before Frank accepted an apprenticeship in London to a City quantity surveyor.  However, then after qualifying he returned to Bridgman’s as a senior architect.

George Bridgman meantime had become chairman of Paignton Urban District Council, with overall responsibility for the growth and planning requirements of the town.  This was a powerful position from which to build his business and was not unusual in those days.  William Kitson had earlier enjoyed much the same influence in Torquay, through his connection with Lawrence Cary.

However, Torquay and Paignton were never going to retain Frank Matcham for long.  When the successful theatre designer J. T. Robinson gave him the opportunity to return to London and Mayfair he was soon off, for ever.

Robinson had already established himself as Britain’s leading thatre architect and in 1892 Sir S. Ponsonby-Fane would descrive him as “a very clever designer of theatres… intimately acquainted not only with the building but with the working of theatres.”  Robinson’s influence on Frank was now substantial, and their friendship brought a personal relationship when, on July 9, 1877 Frank married his youngest daughter, Maria, at St James Church, Pentonville.

Sadly, Maria’s father died at the breakfast table a year later so it was Frank who then took control of the already successful business, with its full order book.  With the family’s blessing he even finished Robinson’s uncompleted work, which included the now famous Elephant and Castle theatre in London. 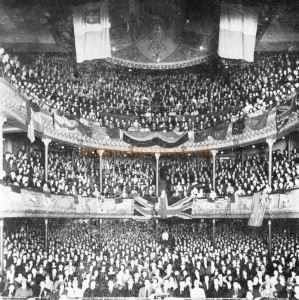 Maria gave birth to their first daughter, Eveline, in 1878 and a year later a second daughter Constance arrived; she survived only until age eight.

Another personal turning point came in the 1880’s when the Revill family employed Matcham as their architect for a new theatre at St Helens, in Lancashire.

Media interest in new theatres was now enormous and interviewers were said to be “on the scent” for Mr Matcham – “I’ll try not to match ’em – I’ll let them Revill for once”.

The Revill family now introduced Matcham to Henry Irving.  In 1888, while laying the foundation stone of the Theatre Royal, Bolton, and using a silver trowel provided by Matcham, Irvine recognised a picture of himself playing Hamlet, cleverly carved on to the ivory handle.  A new special relationship was spawned, and now Irvine officiated at most of Matcham’s theatre openings.

Two years on, the Theatre Royal at Aston-Under-Lyne became the forth of the Matcham-Revill partnership, and over the years dozens more followed, the most famous including the Palladium, the Coliseum, the Shepherd’s Bush Empire, the Chiswick Empire and perhaps the crowning achievement of all, the Tower Ballroom Theatre, Blackpool, in 1899.

Matcham did not just design complete theatres, he also refurbished, redecorated or reconstructed many and, his firm also acted as professional advisors to fire insurance companies.  His theatre construction was, however, unique.  He used a variety of designs ranging from the renaissance or baroque periods to the naval and military splendour of the Theatre Royal at Portsmouth and the oriental style used at the Elephant and Castle.

The Devon born designer became world renowned for his specialism.  The 19th century heyday of theatre building was immensely challenging and his timing opportune.  Styles of materials and appliances were changing, steel was replacing wood, fire curtains and fire precautions were the norm, and backstage innovation was having to keep up with modernism.

The London offices of Frank Matcham and Co at 9 Warwick Court, Holbotn, sadly kept no record of his huge personal involvement in the prodigious workload.  Matcham certainly had to delegate and this perhaps explains why so many latterly august architects wanted to work at his practice.  There was undoubtedly high respect, and friendship, between all partners and employees.

Younger employees were even welcomed at Matcham’s home.  One, F. de Jong, an accepted king of fibrous plaster manufacturing, became a lifelong friend which eventually resulted in him being appointed one of Matcham’s executors.

Personal friendships were a recurring theme throughout Matcham’s life.  Theatre promoters returned to him for friendly help on numerous occasions.  When A. J. W. Broughton lost his Theatre Royal at Portsmouth through fire he commissioned Matcham to rebuild it.  Later, when asked by Southsea to put that town “on the map”, he would only underwrite plans for a new theatre in the town if Matcham was architect.  The King’s Theatre at Southampton was the result and Broughton got every penny of his investment repaid.

Matcham had numerous hobbies.  He loved travelling, favoured hill areas for holidays, and often went to the Lake District, North Wales, the Isle of Wight and his native Devonshire.  He was generally alone as Maria was a poor traveller.

Not surprisingly, he was an ardent sketcher and painter of miniatures and travelled widely abroad, visiting Portugal, Spain, Sicily and Italy.  He visited the Pyramids and saw the Sphinx and even went to America where his three brothers lived.

He adored motoring and with his chauffeur was often to be seen in his Daimler-Benz sporting the inevitable cigar.  He remarked: “One should enjoy work” and he certainly followed that maxim whenever possible.  He also liked to attend the opening night of any new theatre and although described as an extrovert, when asked to make a speech, would merely ask the audience if they liked his new theatre.

Style seems to be the keyword in this man’s life.  His companionship, humour and friendship played an important part throughout.  The nicknames given to him of “Matchless Matcham” or “Magnificent Matcham” followed him everywhere.  It was the notorious actress Lillie Langtry who penned a prologue to him when she opened at the new Cheltenham Theatre and Opera House in 1891, in which she said:

“Nay, where (within this house you’ll agree),

From then on he was known as “Matchless Matcham”.

By 1912, however, the boom in new theatres was in decline and Matcham’s workload was falling; war was on the horizon and only a handful of commissions would be completed over the next few years.  By now he had designed around 150 theatres – but cinemas were becoming the rage.

Over many years he had created a special armchair ambience in the opulent seats in the most sumptuous of his theatres, such as the Northern Palace of Varieties in Leeds; he was never to know that, thanks to radio and television, a later era of armchair entertainment would be based in the home.

Matcham was blessed with good health throughout his life but this gifted man died of heart failure at his home in Southend, on May 17, 1920.

Curiously, it was not overwork or a congenital disease that brought his death, but the careless trimming of his finger nails, which led to blood poisoning.

Here are some other links:

This video is brilliant: