Peter Taylor Forsyth was born in Aberdeen, Scotland on this day in 1848 to a working-class family, and was educated there through his university years.  Afterwards, he became a Congregationalist minister serving in five successive congregations in England at Shipley, London, Manchester, Leicester and Cambridge.

At the turn of the 20th century, he became principal of Hackney College, London, a position he held until his death in 1921. It was here he wrote 25 books and hundreds of articles,

For me, the initial attraction of Forsyth’s thought was simply the energy, the force and passion with which he wrote. It was quite unlike anything else I’d encountered. Very soon, however, I began to appreciate his conviction that all things are determined by one centre – God’s action in Jesus Christ.

The pastoral power and ramifications of such a conviction are immense.  Hence, “It was the race Christ redeemed, and not a mere bouquet of believers” and “[God] is no spectator of the course of things, and no spectator on the result.”

Like Karl Barth, his theology was hammered out on the anvil of weekly preaching and pastoring. But he identified the inherent weakness of the human-centered “theology” that prevailed in his time (and sometimes ours) two decades before Barth.  In his brilliant book “Positive Preaching and the Modern Mind” a collection of lectures delivered at Yale University in 1907, he declared, 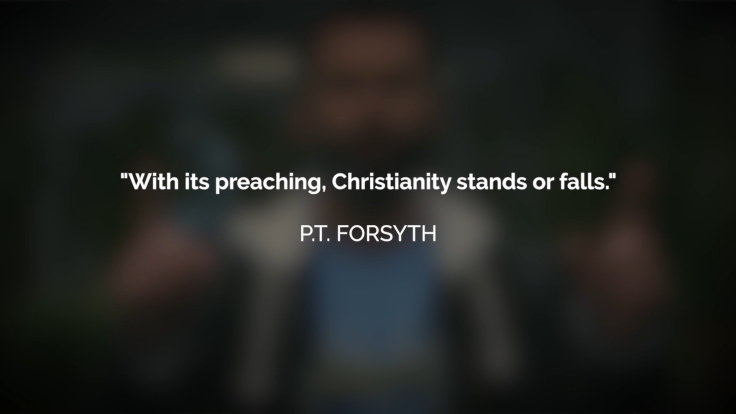 Not everything he wrote translates easily to our time, but his writings reflect his deep love for the Gospel and his prescient insights in what that Gospel might mean in/for the world

At the heart of his thought is the “work of Christ”, what God has done for us that we cannot do for ourselves in the atoning cross of Jesus Christ.  Some found his work difficult, one called his theology “fireworks in a fog!”  At least he had fireworks I say!

Arguably his greatest book The Person and Place of Jesus Christ is a work that reminds the world what it needs and not what it wants!  Forsyth said,

“Do not say, ‘God is love. Why atone?’ The New Testament says, ‘God has atoned. What love.’ The ruling passion of the Saviour’s holy God is this passion to atone and to redeem.”

With Christ and the Gospel at the very centre – against the fashions of his day – Forsyth has been called a prophet of the Cross  “If Christ’s cross means anything, it means the destruction of evil everywhere and forever.”

Forsyth went behind both Church and Bible to what made them both – namely the Gospel of God’s redeeming and recreating act in Jesus Christ.  He adds, “Remember that Christ did not come to bring a Bible but a Gospel.  The Bible arose afterward from the Gospel to serve the Gospel. The Bible, as preacher, and the Church, are all made by the same thing – the Gospel.”

Understanding the love of God as “holy love” Forsyth was reclaiming what had been lost in his day, and in doing so, he called into question the flabby religious sentimentalism of his time in the name of the God who takes sin and evil seriously and has acted to overcome it.

Reflecting on the sentimental tendency of his day, he says, Writing in the early 20th century, years before the two World Wars, his was an isolated prophetic voice that we can now see in retrospect understood both the evil that humans can do and the vast love of God acting to redeem and save these same humans “not at their best, but at their worst.”

He is not a household name in the theological world, but like a seed that is planted and grows out a few generations later, more and more people are discovering this incredible figure once again.

Who couldn’t love the work of someone who on almost every page writes eminently quotable aphorisms:

“God’s gracious self-giving to humans in revelation and redemption does not come to grout the gaps in nature.”

His heart was broken at the outbreak of WW1.  One third of his library was German and he loved the country deeply.  But he saw through the impossibility of the church being a restraining influence, when he said it was like “meeting the Atlantic with a mop.”

He was a prophet as much as a theologian, combining brilliance of insight with passionate rhetoric.

Every time I read Forsyth, I am lifted to higher plains, and sometimes I get goosebumps and the force and truth of his words.

I leave you with my favourite quote that I use often:

We give thanks to God for Peter Taylor Forsyth and his labours on behalf of the church.