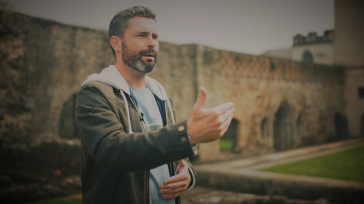 Jeremiah is a towering figure in the Old Testament at the time of the 7th and 6th  centuries BC.

In many ways, he is the nearest a man can get to chasing after God’s own heart.

But without his particular “weaknesses.”

Jeremiah, called as a young boy, was different.

He is hesitant, courageous, outspoken, assertive, fragile, afraid and determined.

But above all he is empowered.

Empowered for ministry, or as God would call it (ch12):  “Running with the horses.”

For me this phrase is absolutely at the heart of mission and ministry.

Underneath the carpet in my study at church, I have written in big black letters, “Run with the horses”.

No one else but the carpet fitters and myself know it is there.

They must have read it but never said a word!

And it serves as a reminder of why I am where I am.

Jeremiah inspires me to this day.

He isn’t named personally in the famous Hebrews 11 faith chapter.

But his entire prophetic office is summoned:

32 And what more shall I say? For the time would fail me to tell of Gideon and Barak and Samson and Jephthah, also of David and Samuel and the prophets: 33 who through faith subdued kingdoms, worked righteousness, obtained promises, stopped the mouths of lions ……. 36 Still others suffered mockings and scourgings, yes, and of chains and imprisonment. 37 They were stoned, they were sawn in two, were tempted, were slain with the sword.

The Kingdom of God preaching always draws some, and repels others.

And Jeremiah was at the sharp end of what happens when people hate your ministry.

A ministry that witnessed the coming Babylonian invasion, and the subsequent destruction of the Jerusalem:  City and Temple in 586 BC.

The kings of Judah just would not listen or take Jeremiah seriously.

Jeremiah was resolute over four decades of this kind of resistance.

From During the reign of Josiah to the very end with Zedekiah.

No wonder Jesus said, “O Jerusalem, Jerusalem, the city that kills the prophets and stones those who are sent to it! How often would I have gathered your children together as a hen gathers her brood under her wings, yet you were not willing!”

In Hebrews 11:10, in talking about Abraham, the unknown author tells us that, “…he was looking forward to the city that has foundations whose designer and builder is God.”

Jeremiah was told by God when he first called him that he too would be God’s builder – but more than that.

Jeremiah has been consecrated and appointed.

Yet stumbles and stutters over his words and ministry.  This makes him human.

He complains and argues with God.  This makes him honest.

He remains faithful to the task.  And this makes him empowered.

He is second only to Jesus in using illustrations and living them out.

Broken cisterns, wooden yokes, dirty pants, deceitful brooks, the potter and the clay; he even buys a field during the Babylonian siege.  I could go on and on.

His message is, however, totally ignored.

Jerusalem did fall to the Babylonians.  God’s covenant people were swept away.

It is a sober warning on how we measure success in ministry.
Jeremiah was faithful and Jerusalem fell.

He ignored the jingoism of the ruling elite who only wanted their prophets to say nice things to them.  Jeremiah interpreted his times as all true prophets do!

Jeremiah witnessed the destruction of his beloved Jerusalem.

His sorrow is captured in Lamentations:

“How lonely sits the city that was once full of people…”

In the end, Jeremiah was taken to Egypt where he died, as tradition has it, by stoning.

But his crowning glory was his vision of a coming New Covenant 31:31ff.

A covenant of the heart, where sins are atoned for; where people will truly know God.

And the great and repeated OT promise is fulfilled:  “I will be their God, and they shall be my people.”

Hebrews 11 is set up perfectly by the words at the end of ch10:  “But we are not of those who shrink back and are destroyed, but of those who have faith and preserve their souls.”

And he speaks today.

2 thoughts on “Jeremiah the Man of Faith”