Last Wednesday I paid my first ever visit to Spurgeon’s Baptist College in London (I went to Bristol #happydays).  It was a secret that many fellow minister’s and tutors held as we sprung a surprise on Rev. Dr. John Colwell, for his lifetime of service to the Church and University, although he confessed to increasing suspicion as the minutes rolled by.  John is a wonderful man, and it was a real treat for me to get to know him as my mentor when I moved to South Devon and first met him.  He has preached several times at my church, and is a most excellent preacher at that!  I interviewed him a few years ago which received more hits in the first month than any other blog post I wrote (he doesn’t know that)! What follows below is the account of that day from the Baptist Times online paper here.

The award of the Festschrift took place at Spurgeon’s College last Wednesday (31 October), where John was both student and then a tutor. Baptist minister Andy Goodliff, who edited the volume alongside father Paul, explained how it came about.

‘John Colwell writes that reading Stanley Hauerwas radically changed his life. For me reading John Colwell radically changed my life. I remember in 2003 picking up Living the Christian Story off my father’s bookshelf. I read it in two days. The dry approach that had been my experience of Christian ethics was transformed through John’s call to indwell the gospel story. My understanding of discipleship has followed this path ever since. I know that for any of his students whom he taught have had the same experience that I had in reading.

‘So it was in 2017 that my father Paul Goodliff and I conspired with friends and colleagues and with the help of John’s wife Rosie to produce a book in his honour and surprise him with it.

‘On 31 October, a day that some remember for Martin Luther, a group of Baptists gathered at Spurgeon’s College, John’s former home as a ministerial and post-graduate student and then 15 years as a tutor, to surprise him with Rhythms of Faithfulness. We had arranged for John to come and give a talk as part of a day of theologically reflecting on the Order for Baptist Ministry, which he helped found in 2009. John knew something was up when the group who had gathered numbered among them unexpected guests, especially his former student and friend, Steve Holmes.

‘It was a special moment to present John with this set of essays that engage with his own work and seek to build upon it.’ 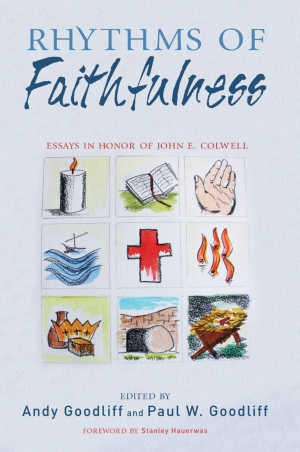 Andy said the book comes in two halves. The first reflects on the various moments in morning prayer that are contained in the Daily Offices of the Order for Baptist Ministry. It explore what it means to come into God’s presence, to celebrate God’s presence, to acknowledge our humanity, to listen to the Word, bring our concerns and to go to love and serve.

The second half takes a different feast or season from the Christian year — following John’s work in The Rhythm of Doctrine — and depending on the author exploring it theologically, biblically and historically.

‘The aim of the book is to first rightly honour John,’ Andy continued. ‘Baptists theologians of real ability are few and far to come by and John has been and is one of our theological voices that we would do well to listen to.

‘The second aim is to offer Baptists and other Christians an encouragement to take the Christian tradition, the Christian year as a gift we have not always treasured, and to give new attention to it would aid our call to the rhythms of faithfulness that is following Jesus.’

Sally Nelson, a former student of John’s and now the Dean of Baptist Formation at St Hild’s College, was among the contributors to Rhythms of Faithfulness. She spoke of John’s influence on his students.

‘It was lovely to return to Spurgeon’s after a gap of about 10 years – and on such a beautiful sunny day. The people who gathered on 31 October have long since scattered in the pursuit of their respective ministries, and would rarely be in one place at one time – except to honour a colleague like John!

‘When I started at Spurgeon’s (incidentally, on the same day John started teaching there), women still formed a vanishingly small proportion of the college-based ministerial students. Most of us had experienced a bruising journey through selection, and deeply appreciated the fact that John was unfailingly supportive of our ministries. I particularly remember a chapel sermon he preached, exploring theological questions around a hypothetical female ‘Christa’.

‘However, even more important was John’s ability to communicate excitement about theology. His enthusiasm for theological exploration, and his commitment to its importance for ministerial formation, will have influenced scores of Baptist ministers who went through Spurgeon’s during his 15 years there. Teachers are often ‘invisible’ influencers of others, and maybe rarely see the outcome of their work.

‘I hope that this Festschrift will be a blessing to John and show him something of the result of his ministry, which has snowballed out to so many others through the students he has helped to form.

‘I am also grateful to Andy and Paul Goodliff for all their creativity in organising a project that was thankful, positive and affirming: what a great day, celebrating Christian service.’

Responding to the day, John said, ‘Not much leaves me speechless but this came close: it was wholly a surprise and most humbling.

‘I am so grateful to be surrounded by friends, both in their presence and in their contributions to the volume.’

Rhythms of Faithfulness Essays in Honor of John E. Colwell is available at Wipf and Stock.

One thought on “Festschrift honour for John Colwell”