“The Church, though dispersed throughout the whole world, even to the ends of the earth, has received from the apostles and their disciples this faith:  She believes in one God, the Father Almighty, Maker of heaven and earth , and the sea , and all that are in them; and in one Christ, Jesus the Son of God, who became incarnate for our salvation; and in the Holy Spirit who proclaimed through the prophets the dispensations of God:  [announcing in prophecy] the birth from a virgin, and the passion, and the resurrection from the dead, and the ascension into heaven in the flesh of the beloved Christ, Jesus our Lord, and his future manifestation from heaven in then glory of the Father to gather all things in one, and to raise up anew all flesh of the whole human race . . . . .

As I have already observed, the Church, having received the preaching and this faith, although scattered throughout the whole world, yet as if occupying but one house, carefully preserves it.

She also believes these points of doctrine just as if she had but one soul, and one and the same heart, and she proclaims them, and teaches them, and hands them down, with perfect harmony, as if she possessed only one mouth.

But as the sun, that creature of God, is one and the same throughout the whole world, so also the preaching of the truth shines everywhere, and enlightens all [people] that are willing to come to a knowledge of the truth.” 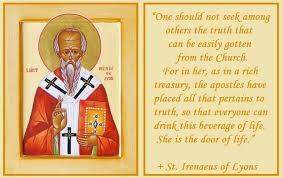