Whilst I was digging around in some church history today, I came across this nugget of Eusebian observation:

“As the third century drew to a close, the tensions within the church were becoming more explosive.  Eusebius looking back on the situation as he had seen it as a young man could write,

‘But when as the result of greater freedom a change to pride and sloth came over our affairs, we fell to envy and fierce railing one against the other, warring upon ourselves so to speak as occasion offered with weapons and spears formed of words, and ruler attacked ruler and laity formed factions against laity, while unspeakable hypocrisy and pretense pursued their evil course to the furthest end.’

It was a grim picture of ecclesiastic strife at the moment of Christianity’s triumph.  Paganism had indeed been defeated.  The world was ripe for religious change, but not for religious peace.”
The Early Church by W. H. C. Frend, Page 114

*
And this made me think!  The church had faced all sorts of external pressures and problems, persecutions and heresies.  When peace came, they turned on each other!  This is shocking!
*
Nietzsche made a similar point when he observed a church that was brazenly hypocritical; living, as it were, with a great gulf between what she said she believed, and what she actually did.  I suppose this applies to both corporate and individual.  He said,
*

“They would have to sing better songs to make me believe in the Redeemer:  his disciples would have to look more redeemed!”
Friedrich Nietzsche, Thus Spoke Zarathustra 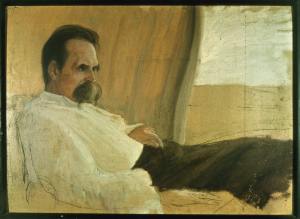 *
I get what he means about the songs on some Sundays, but I don’t know what he means that those who follow Jesus should look “more redeemed”, I’ve tried to look more redeemed, and my wife asks me if I’m ill, or in pain!
*
I suspect Nietzsche meant act more redeemed, although, acting righteously brings its own set of unholy problems;  all manner of good-deeds can mask insidious sin and self-serving righteousness.  Basically, the church has always struggled.  Struggled with what it claims and what it does; or what it believes and what it practices.  Sin could be most seductively and demonically at work under the guise of doing good.  Many a good intention is shipwrecked upon the rocks of slightly off-centre zeal!
*
While Nietzsche is appalled at the church he observes (probably a limited observation anyway unless he really was Superman); Eusebius, on the other (and much earlier historically) hand, is quite shocked!  “OMG, they’re turning on…. themselves!”
*
But, hang on a minute!  I’ve read the gospels.  I follow Jesus.  I am Judas and Peter and Thomas!  I am Mary Magdalene and the woman at the well; I’m both thieves on the cross either side of Jesus.  I’m not shocked by the undignified reality of sin in our midst.  Not at all.  “Develop your doctrine of sin” is one of my oft cited phrases, then sentimentality is banished, and real life is faced in a truly God-oriented human way.  So that when we admit the weakness and foibles of the church rather than defensively sloganeer a cheap apologetic, we begin, I think, to catch a glimpse of the mystery of the church. A mystery drenched in grace, if only we could see.
*
Wait another minute, I’m just gonna check my Old Testament…..Yep!  Just as I thought, the Covenant People of God weren’t exactly…..what’s the word?….loyal to YHWH.  They might’ve turned up to the Divine wedding ceremony, but they kept bunking off with all the bridesmaids (don’t read Ezekiel 16 expecting an uplifting fuzzy-quiet-time-moment with God – more like a sick bucket with a “is that really allowed in the bible” moment)!!!
*
Yes.  The church is a mystery.  We who are in it, proclaim stuff that makes us cringe with embarrassment.  Not because we are embarrassed about what God has done for humanity in Jesus Christ, but because we know we are the undeserving recipient of such amazing grace!  “I believe in one holy, catholic church….”  Well, we know it’s not that holy, we know the catholic oneness is not quite the reality we see in the world today, so something is amiss, and will shock the one who expects a dainty religion to bolster a flagging life, or a religious Pharisee who parades up and down like an unholy stoic, full of religious words and self-motivation and self-determination and self, self, self….
*
It will not do to be part of a movement that says ‘Yes’ to Jesus but ‘No’ to the church.  Oh throw eggs at the institution if that makes you feel better (I do!).  We know that it is flawed, but, praise God, we are here now, in this time, to bring our relevant and necessary and needed reform.  The church is always becoming, it never “is”, it is “is” but not in the sense of completion and arrival.  We mustn’t make the Corinthian mistake and over-realise our eschatology!
*
We are fallen, fragile and finite, and God knows that!  Phew!
*
Eusebius and Nietzsche, and most likely you and me, agree that there’s a problem.  The problem is not out there, it is in here, in me and you. That doesn’t change our status before God:  loved from before the creation of the world, and so on.  The problem is the reason for our salvation:  whether it be a rejection of God and an elevation of self (i.e. active self-centred idolatry); or the opposite, a passive, self-centred idolatry that rejects self enough to allow “other creatures” to take the place of God in our lives.  So that, sin is both insurrectional and sensational, but also banal, mediocre, and totally uninventive and unimpressive!  Thus, sin against the grace of God is not only what Migliore calls “titanic” but a “Luciferian rebellion” that is “timid, obsequious” and refuses “to dare to be fully human by God’s grace.”
*
I dare you, I dare me, to be fully human by God’s grace….And then live within a church that is a beautiful, sinful, redeemed, hopeful mystery.
*