…..and it didn’t hurt.  They were a trio of lovely people.  One of whom I had met several times until, I suspect, she (a 70+ Italian living in England) was banned from visiting me; I can only assume that was the case, since her frequent visits stopped so suddenly.  It may have been my poor tea making ability, but in all honesty, I do pride myself on making pretty dang good tea!

Anyhoo, the trio were loitering around the cliffs of Devon whence I came upon them.  I have a love for these people “of faith” and tried to convey as much.  As soon as it was revealed, like a dirty secret on EastEnders, that I was a “Christian”, and worse, a “Baptist minister”, well, all manner of gehenna and rotten-exegesis broke loose.

I wanted to go down the relational, friendly, understanding, “liberal”, loving route, but was thwarted by the doctinaire police from the school of eisegetical proof-texting sloganeering.  I really wanted to love these beloved personages towards the love of God, but they seemed intent, bent…..hell-bent on bringing to the fore an apocalyptic Hebrew Scriptural Hermeneutic that astounded, but sadly, didn’t surprise me.

What do I mean, I hear you sigh?  Well, for one, the strength of their apologetic was rooted in an Old Testament apocalyptic rhetoric of judgment and retribution.  I know full well there are Pslams (other genre are available) that betray a particular aspect of sin and judgment and wotnot.  But, for the love of God, the love of God was not so much a silent witness, as more a total absentee; more AWOL than anything else (“You weren’t there man!”)

When asked what the primary message of Jesus was, it turned out to be a revenge attack on the wicked and immoral.  I asked, in all seriousness, with a straight face, “Did the coming of Jesus make any difference?”  “Yes!” they replied, before quoting extensively from the imprecatory Psalms.

My heart sank, whilst my eyebrows rose and my toes curled.  Jesus didn’t make a difference from a pre-Gospel; pre-incarnation; pre-logos-becoming-flesh text.

“Didn’t Jehovah say we will be his witnesses?”  Indeed my ill-learned friend, he did (Isaiah 43:10).  But why fixate on an Old Testament text when you could fixate on a New Testament text:  “…and you will be my (Jesus’) witnesses in Judea, Samaria….everywhere…”  (Acts 1:8).  Jehovah’s Witnesses-Jesus wtnesses….oh my brain can’t cope with this theological explication!

What a great eye-brow was raised that day!  Like I’d invented the verse.  Anyway, that’s (not) a moot point.  The point is this.  Given the apocalypyical legerdemain, I thought I’d ask a simple question to my three friends, the Jehovah’s Witnesses:

“Where are the Jehovah’s Witness between AD 100 and when Charles Taze Russell decided to have a go in the 1870’s?”

I’ve heard they were secret believers!  That’s hardly an inspiring way to think of God is it? His witnesses were not witnessing, but they were dormant, lying low, hiding, etc.  Oh please.  Whatever.  “That’s a very good point,” he said rather thoughtfully.  Quite.

The fact is, this doomsday apocalyptic cult is full of sincere ill-educated believers with an axe to grind about organised Western Christianity (admittedly, many in mainstream churches are the same, though they grind their axe via different methods (Eph 4:29-32)).  I don’t blame them for that.  Not at all.  I do blame their Shepherds who apologeticise them into sloganeering and proof-texting, bad hermeneutics and sloppy church history, and so on.

It’s embarrassing (a lot of church life is)!  It is nothing more than a gathering of the malcontents of religion and life (half of which I have total sympathy for), but the level of ineptitude and certainty, is on a level with politicians and economists – fanciful at best; and downright decptive at worst.  I don’t blame the poor peddlars on the streets.  I blame their overlords – who resemble the Catholic hierarchy more than the actual Catholic hierarchy.  They have become the thing they detest, and in so doing, they have become detestable – not the individuals, the system.  They represent the Arians of history – outclassed and out-theologised – doomed to a simplistic apocalyptical hermeneutic of disenfranchised illiterates, yet….and yet,  deeply loved by the Triune God.

I wanted to be generous, loving, gospel-centered; but found I was thwarted at every turn with apocalypse and judgement and revenge of the wicked.  So I asked a question of my friends:  “What would be the first thing you would say about God?”

My heart sank, when I heard him say, “In the Psalms, it tells us (lol) that God will judge the wicked with fire and that he will come to the humble!”  What?  You’re actually serious!  We have to be humble before God will come to us?  In other words, it’s all about us, and our attitude, place, station, status!  It was not about what God has done for us in Christ; astonishing that they think “Jehovah” wants us to “get right” before we “get right with God!”   (Private thought:  stuff that god – you can keep that bastard tyrant) – excuse my French!

That was the FIRST thing he would say!  No mention of Jesus, or the gospel.  I suggested a good place to start might be Luke 4:18-19…….I tried not to be smug, I really did!  But freedom to the prisoner, good news to the poor, sight to the blind, release for the oppressed and the proclamation of the year of the Lord’s favour might be a better place to start.  But no.  Apparently, this JW thought that Jesus’ own mission statement was not good enough….because Jesus was/is not good enough….Indeed and oh dear!

So I asked again (after I had been on the recieving end a a few “final questions”):  Where are the JW’s of history?

“I’ll need to think about that!  I’ve never heard that before!”  Says he.  WHAT?

And I’m trying to be generous and friendly, etc, so here’s a Devon sunset picture I took to prove it. 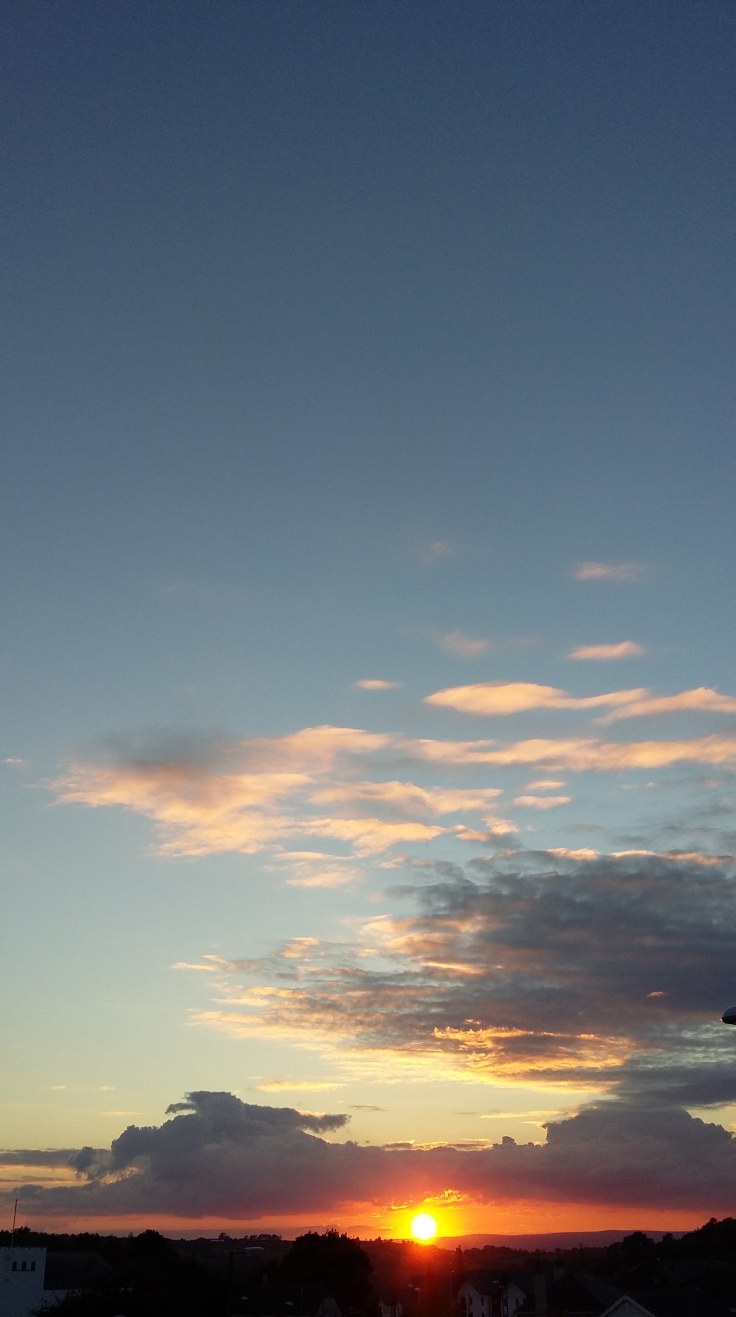