Now that the fuss has died down about that insanely pathetic knife attack at Leytonstone tube station by a supposed “fundamentalist”, it is worth a little bit of Zizek to calm our nerves and self-congratulation and sense of defiance.

What is a fundamentalist?

My former Principal once made a dismissive passing comment that fundamentalism these days is all ‘mental’ and no ‘fun’!  I thought it was a clever way to carve up the word, but this comment has stayed with me over the years and actually, has more truth than I thought possible.

As that wonderful, instantaneous phrase suggests, the man carrying out a cowardly, random act of violence, is no Muslim.  But what I think would be more shocking for the perpetrator, is to discover that even if he is a Muslim (which he obviously is, even the liberal West can’t take that away from him), he ain’t even no fundamentalist!

Slavoj Zizek, a philosopher I love and hate to read, captures the heart of this issue  in his magnificent book Living in the End Times, when he writes,

“…, are the so-called fundamentalists, be they Christian or Muslim, really fundamentalists in the true sense of the term?  What they lack is a feature easy to discern in all authentic fundamentalists, from Tibetan Buddhists to the American Amish – the absence of resentment or envy, rooted in a deep indifference towards the non-believers’ way of life.

If today’s so-called fundamentalists really believe they have found their way to Truth, why should they feel threatened by non-believers (emphasis mine), why should they envy them?  When a Buddhist encounters a Western hedonist, he hardly condemns him.  He simply denotes benevolently that the hedonist’s search for happiness is self-defeating.

It has been reduced, minimised from a glorious and self-confident macro-worldview, to a shallow, decrepit and altogether dank existence that knows nothing but paranoia, ideology and violence!  It truly is mental!  At least the true fundamentalists know that in their benevolence, there can be an enormous amount of fun into the bargain!  Of course there’s fun!  Who has not had a wealthy (or however it is projected) boasting friend brag on about this or that product or experience (yawn-yawn), and genuinely felt content that their boasting is but the guff of an over-inflated ego, insecure in the big wide-world of dangerous adults (the true fundamentalists) who know what contentment is?

“…the passionate intensity of the Muslim crowd bears witness to a lack of true conviction.  Deep in themselves, fundamentalists also lack true conviction – and their violent outbursts are proof of it.  How fragile the faith of a Muslim must be if he feels threatened by a stupid caricature in a minor Danish newspaper?  The Islamic fundamentalists’ protests are not grounded in a conviction of their superiority or a desire to safeguard their cultural-religious identity against the global onslaught of consumerist civilization.

At this point – a critique and a compliment.  I think that many (most?) in the West do actually consider themselves superior to fundamentalists (as they are popularly defines in the media).  Of course we do!  They’re that bad guys, we’re the good guys, and good guys are always superior – didn’t John Wayne teach you anything?

That said, the “fundamentalists” do in fact consider themselves inferior.  Much of the Muslim world is enraged at global Western domination, because it (the West) subjugates the Two-Thirds World at the expense of the First World; the “Free-World”; the “Democratic West”; the liberal-minded sophisticated ones!  As if.

When I was a missionary in Cairo, Egypt, I heard one Muslim friend of mine exclaim in tones of sheer frustration, “We used to be the head, and now we are the tail; I want to be the head again!”  I understand that comment much more now than I did then; the “we” is not just Egypt (as he meant it) but the Muslim world, even if he did fancy a bit of the high life on a personal level (and who could blame him)!  He was expressing his personal frustration at his corporate situation – in other words – he knows the pie is big enough and although he’d like more than his fair share, he knows he’s getting nowhere near as much as he should to live a dignified human existence!  So when the West says in such loving and liberal tones of humilty that we really don’t feel any superiority, we may as well throw oxygen cylinders of superiority onto the raging flames of frustration.  Of course we feel superior – it is the very way of life we are defending and protecting, for heaven’s sake!

“This is why our condescending politically correct insistence that we feel no superiority towards them only makes them more furious and feeds their resentment.  The problem is not cultural difference (the fundamentalists’ effort to preserve their identity) but precisely the opposite:  The fact that they are already like us, that secretly they have already internalized our standards and measure themselves by them.

(This clearly also goes for the Dalai Lama, who justifies the Tibetan Buddhism by Western standards in terms of the pursuit of happiness and the avoidance of pain.)  Paradoxically, what the fundamentalists really lack is a dose of that true “racist” conviction of one’s own superiority.”

If you’re going to be a fundamentalist, be a fundamentalist.  But for heaven’s sake, don’t – in the words of Edmund Blackadder – be like “a giraffe trying to get into a polar bear club,” it’s embarrassing, unneccessary and altogether, fundamentally,  not fun! 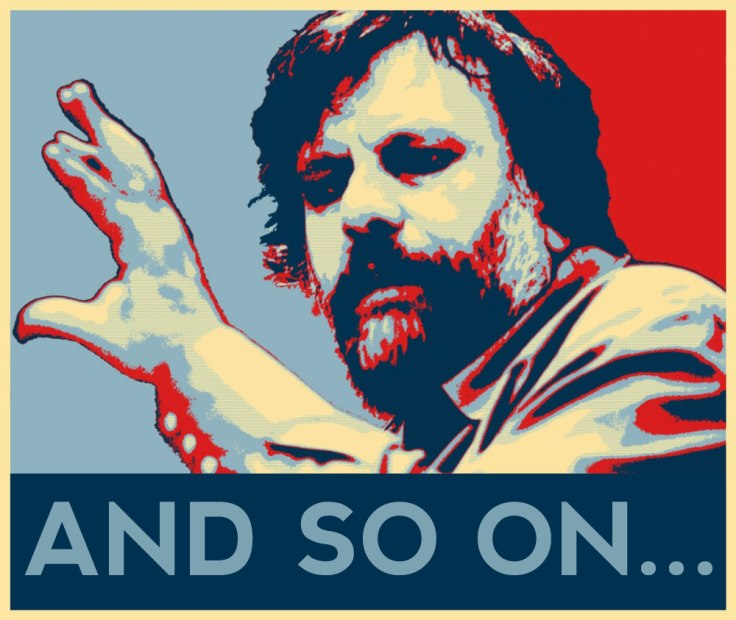