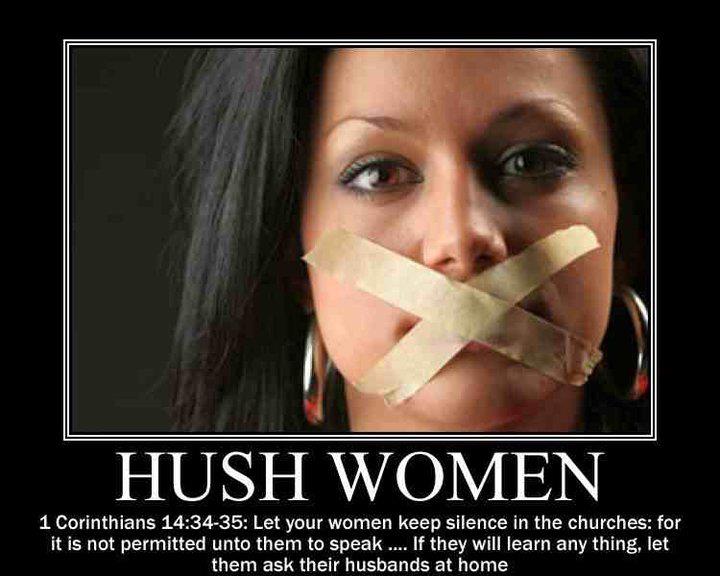 I am going to do some personal research of a biblical theology of women in ministry.

Why is the church struggling, in some quarters, to come to terms with this great egalitarian-complimentarian divide?  I for one am tired of the way this hurts churches and seems to limit ministry potential in so many women.

I’ve already revealed my preference (bias?), but so what!  Why should I, and who am I, to limit the ministry and giftings of women who are born to teach biblical truth and sound doctrine?  What notion of patriarchy do we inhabit when we fail to ‘fan into flame’ the gifts of God so evident in many godly women.

Above is a picture with text I for one find insulting to humanity!  Below is an outline of where I would like to go.  They are discussion points and areas of particular study necessary for exegesis to trump eisegesis (although this comment in no way is meant to undermine a complimentarian view that has been thought out; my point is simply to counter the infantile notion that claims “that’s what the bible says” as though anything that counters it clearly isn’t taking the Bible seriously.  This study, as the outline below shows, focuses on a biblical theology of women; historical, contextual and grammatical detail, as well as applying this study to the contemporary church today.

The categories and questions are:

Patriarchalism and the Old Testament:

i.   Do the creation accounts of the first humans mandate patriarchy?

iii. How do spiritually gifted women fit into the larger structure of patriarchy?

iv.  What bearing does the hope for the messianic outpouring of the Spirit have on the issue of women’s role among God’s people?

Women in Judaism at the time of Jesus:

i.   Given the severely limited opportunities for women to participate generally in public life, how do the actions of Jesus impact this institutional-cultural marginalisation?

ii.  Given the religious restrictions for women in first century Judaism, how do the discipleship relations between Jesus and women impact their status among God’s people?

iii.  Given the general suspicion about women’s ability to be truthful in the Grecco-Roman world, what theological significance might there be in the fact that the first witnesses to the resurrection of Jesus were women?

iv.  If Jesus was open to women in much broader ways than was typical for a Jewish first century culture, why did he not appoint a woman as one of the twelve apostles?

i.  Does the closure of dynastic leadership and the opening of charismatic anointing upon all God’s people have any bearing upon the role of women in the New Testament church?

ii.  Is the nature of New TEstament leadership defined primarily by authority or servanthood, by office or calling, by hierarchy or gift?  What are the implications with respect to gender?

iii.  In the general listing of spiritual gifts, were they restricted to to males only?

i.  Do Paul’s instructions about headship and submission necessarily exclude women from positions of leadership in the church?

ii.  Does Paul’s “male” language in his criteria for elders and bishops necessarily  exclude women from positions of leadership in the church?

iii.  How can the demand for women to be silent in the congregation be reconciled that women have authority to prophecy or pray publicly?

iv.  Does not Paul forbid women to teach, that they are morally inferior to men, and that their obligation is to be silent?

v.  Even if there is ambiguity in some of the biblical texts, would it not be best to restrict women from leadership positions so as to err, if at all, on the side of safety?