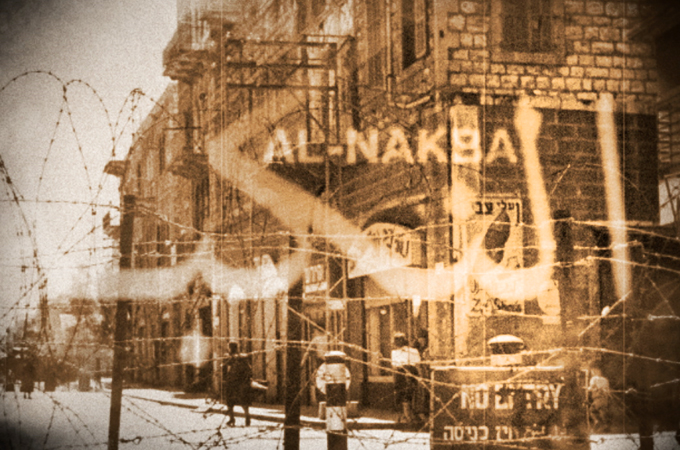 May 15th, 1948 – The Palestinian Catastrophe, known as ‘Al-Nakba’, also known as Israeli Independence Day.  One date, one land, two peoples, opposite ends of the spectrum – one people in deep trauma, the other in deep joy, a joy which is certainly tinged with a darkness of soul that must be continually pushed down and ignored.  It won’t stay there forever.  This anniversary is coming round again, and it is right to remind ourselves what is going on, to stand up for justice, for people, for God’s sake.

“Eighty percent of the Palestinians living in Palestine (what is now Israel – excluding the West Bank) fled out of fear or were forcibly evicted by the Zionists.  Most of those who were not pushed out lived on the periphery of the Zionist military action, particularly in the Galilee, and thus managed to stay put, primarily because a cease-fire was signed before they could be evicted.  It was essential, however, for the Zionists to prohibit those who left from returning to their homes, despite international pressure and UN resolutions, and despite Israel’s own promises, made in return for recognition and membership in the United Nations.”

“Refugees wishing to return to their homes and live at peace with their neighbours should be permitted to do so at the earliest practicable date, and those wishing not to return should be compensated for their property.”

“The 750,000 Palestinians who fled lost all their land and possessions in 1948 and became refugees.  Just as Jews in Europe were driven from their homes due to pogroms, Palestinians were forced to leave their homes and land because of Zionist ethnic cleansing.  In what may be termed a Middle Eastern “trail of tears”, refugees . . . trecked to Lebanon, Jordon, Syria, and other surrounding states.”

Count Folke Bernadotte, in a report to the UN said,

“It would be an offense against the principles of elemental justice if these innocent victims of the conflict were denied the right to return to their homes, while Jewish immigrants flow into Palestine, indeed, at least offer the threat of permanent replacement of the Arab refugees who have been rooted in the land for centuries.”

Sometimes we need, in the name of justice, to expose what has been recorded as being said.  This can cause great offense to the ruling elite, not to mention a resurgence of smelling salts to those in so-called ‘polite society’, a euphemism of contempt to say the least!

“We must expel the Arabs and take their place.”

“We must use terror, assassination, intimidation, land confiscation, and the cutting of all social services to rid the Galilee of its Arab population.”

What follows is an account of a survivor first, followed by an Israeli officer, both from 1948.  When we hear Prime Ministers using the language of violence and destruction cloaked in acceptible language as “expel”, we must uncover the meaning.

A survivors memory of Deir Yassin

A survivor who was 12 years old during the massacre recounted that she was hiding with her family, when the door was blasted open and they were taken outside in time to witness a man being shot: 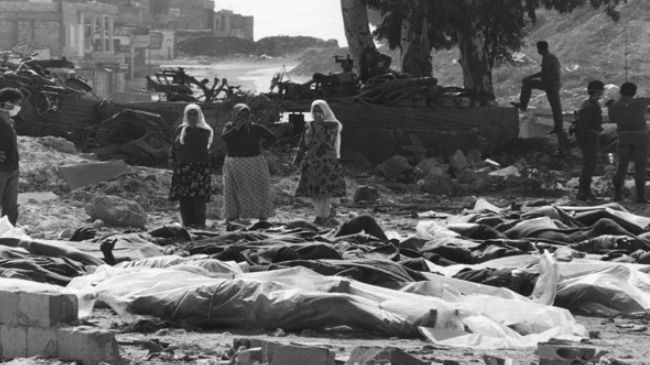 “When one of his daughters screamed, they shot her too.  Then they called my brother Mahmoud and shot him in our presence, and when my mother screamed and bent over my brother (she was carrying my little sister Khadra who was still being breastfed), they shot my mother too.”

“As uncontrolled panic spread through all Arab quarters, the Israelis brought up jeeps  with loudspeakers which broadcast ‘horror sounds.’  These included shreiks, wails and anguished moans of Arab women, the wail of sirens and the clang of fire alarm bells, interrupted by a sepulchral voice calling out in Arabic:  ‘Save your souls all ye faithful: the Jews are using poison gas and atomic weapons.  Run for your lives in the name of Allah.'”

Before Alriel Sharon became the 11th Prime Minister (2001-2006), he wrote to the editor of Davar, a Hebrew language newspaper, in December 1982, effectively confessing, albeit defiantly, to the ‘Dirty Work’ of Zionism,

“I don’t mind if, after the job is done, you put me in front of a Nuremberg Trial and then jail me for life.  Hang me if you want to, as a war criminal.  What you don’t understand is that the dirty work of Zionism is not finished yet, far from it.”

His astonishing arrogance and brazen inhumanity is matched and exceeded by the sheer determiniation of the people called Palestinians, whom Sharon knows he is violating to epic proportions.

The dirty work of Zionism is certainly not finished, and neither is the resistance, the the movement, the determination of the Palestinian people to be free once again.  For sure things will never be the same, but no occupation lasts forever, just ask the Romans, the British, the Nazis, and soon the Israelis – all occupation ends with a reckoning, a moment in time, ‘kairos time’, God’s own time of rightness, of justice.  Not a time of retalliation, but reconcilliation, of harmony, of peace and forgiveness.

This dirty work of Zionism is not even an exclusive Jewish entity, as though all ethnic Jews (whatever that means!) are by default Zionist.  Not at all.  Zionism is a political ideology that thoughtful Orthodox Jews can see right through.  Theirs is a vital part to bringing a solution to the conflict, for as long as the Zionist ideology hoodwinks its adherents, the longer it remains.  This picture is from a growing movement of Orthodox Jews, who actually know their Scriptures, the likes of Amos and Elijah and Jeremiah.  They know what God’s justice looks like, and they know what they see in the modern state of Israel is not justice!  Their caption reads, “Authentic Rabbis have always opposed Zionism and the State of Israel.”

“The tragedy of the people of Palestine is that their country was ‘given’ by a foreign power to another people for the creation of a new state.  The result was that many hundreds of thousands of innocent people were made permanently homeless.  With every new conflict their numbers increased.  How much longer is the world willing to endure this spectacle of wanton cruelty?  It is abundantly clear that the refugees have every right to the homeland from which they were driven, and the denial of this right is at the heart of the continuing conflict.  No people anywhere in the world would accept being expelled en masse from their country; how can anyone require the people of Palestine to accept a punishment that nobody else would tolerate?  A permanent, just settlement of the refugees in their homeland is an essential ingredient of any genuine settlement in the Middle East.”

It is right to finish with the Words of Jesus, the only One in whom there is hope,

“Blessed are the peacemakers, for they shall be called children of God.”

Everything in quotation marks is from this wonderful book by Alex Awad pages 113-124, except the words of Jesus, obviously.

Continued Palestinian suffering during the Israeli bombing of Gaza in 2014….

….I took this picture of a Cross in a graveyard in South Devon.