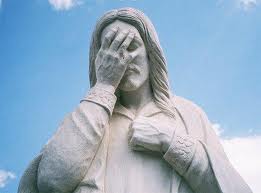 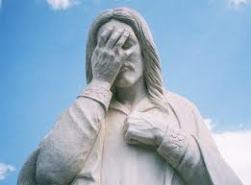 ….I know, sorry Jesus, but the Church is embarassing you!

The Director for the Centre for Biblical Stewardship Scott Preissler has made a frightening prediction if the way the church gives and recieves money through tithes and offerings is not changed, [of the American church only!] he says,

“If you gave away one million dollars a day it would take more than 27,000 years to give away just ten trillion dollars.  Yet that is not even close to the amount that will pass from older generous generations to younger materialistically minded youth in the next twenty years.  The transfer will happen either responsibly or irresponsibly.  The bottom line is that wealth planners reliably predict that forty trillion dollars in family estate transfers will pass from those giving ten percent to non-tithers, who are mostly non-givers, as quickly as within the next twenty years.”

This is a sobering thought to any who consider the future of church life.  The only way to respond is surely to prepare the church today with good bible teaching, sound doctrine and a Christ-like generosity that models to a selfish world the goodness of a giving God.

It may be that as these wealth transfers and churches and denominations go into financial meltdown, the shape and focus of the church will become more defined and intentional.

In a rapidly changing cultural context, the church needs bold imagination not just for mission, but in every aspect of its life, and that includes how the finances are raised and used.  When I first came to my church, the mission budget was £50 and the photocopier budget(!) was £1000.  If ever there was a time I needed Scotty to beam me up, it was then!  So not only was this a misuse (duh! Really?) of funds, but the rigidity of conforming to a tithe (hardly anyone even gives a standard 10% even though the OT tithes were between 10-30%), and the way it was administered (embarrassed hush as plate goes round and poor Mrs Jones is shamed yet again when everyone hears her coppers slam to the brass bottom).  The NT doesn’t even say we have to tithe, but it is pretty strong on generosity.

So Gralefrit affirms that tithing, as it is practised by many churches today, is not a sacred obligation, and therefore, should be radically re-evaluated with an urgency that understands both the biblical text (Old and New Testaments) and the coming future wealth transfer.

NB.  The above is part of a larger study I have done.  If you want a copy I’d be happy to send it.  Let me know.  In the meantime…..  know this:  I’ve stopped the plate/bag/bowl going through/round the congregation on a Sunday morning – it was just so….crass……so cheesy….so darned wrong!

Wake up church or close!  Start living by faith.  Let’s turn our own tables over!